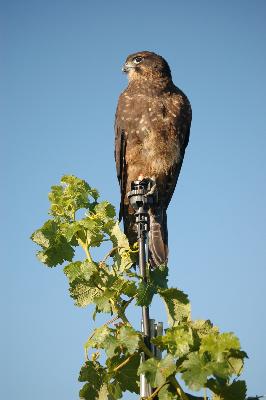 The New Zealand falcon (Karearea) is rarer than a kiwi and is New Zealand’s most endangered bird of prey. These natural predators are an excellent resource in the vineyard, deterring other birds from damaging grape crops.

Since 2010, Brancott Estate has supported the Marlborough Falcon Trust’s efforts to restore that Karearea population in Marlborough by donating $1 from the sale of every bottle of Brancott Estate Living Land, our organic wine range. To date, we had donated around $500,000 to the Trust.

In addition to providing financial support, Brancott Estate has also provided the Marlborough Falcon Trust with land on our vineyard to house a conservation and breeding aviary.

In the time we’ve been supporting Marlborough Falcon Trust, we’ve seen 13 birds rescued. Some are rehabilitated and re-released. Others, who have sustained injuries that would prevent their survival in the wild, remain in the aviary as breeding birds.

In December 2013, two female chicks were released in Marlborough, the first release of aviary-bred birds by Marlborough Falcon Trust. Since 2014, we began working with the Trust to give people the opportunity to see the falcons up-close and in flight with their flying demonstrations.