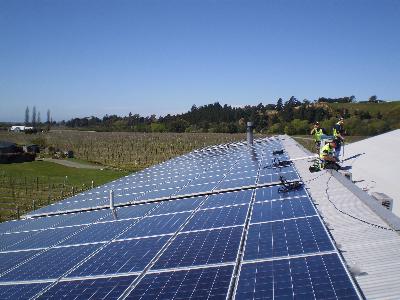 Family owned Marlborough Winery Spy Valley Wines has flicked the switch and is now generating some of its own power, via recently installed solar panels.
In mid-August, 211 solar panels were installed on the roof of Spy Valley’s winery, creating a 52KW solar power system. It officially started generating power for the winery in late October.
The installation of these solar panels makes Spy Valley Winery the largest solar producing winery in New Zealand. Spy Valley’s system is believed to be the 5th largest solar system in New Zealand.
“Marlborough is widely acknowledged as one of the sunniest destinations in the country. I had often wondered why solar power generation wasn’t more widely used in the region,” said Blair Gibbs, General Manager of Spy Valley Wines.

Spy Valley Winery power usage for the year-end 30 June 2013 was 610,000 KW. This installation of the solar panels will generate some 15% of estimated future usage. The payback period is calculated to be eight years but will reduce as power prices increase, which is a long-term trend. Spy Valley hopes that they will be able to produce their own electricity in future for $0.06 per kWh, a substantial reduction on current market prices.

Early results show the system is performing well above the initial expectation.
“The rationale for us to adopt solar power was mainly to reduce our own power costs, and to become more aware of how much we actually consume. We have a reputation as innovators and hope that our adoption of solar power, even just for partial power generation, can be held up as an example to other businesses.
“Much is made of marketing sustainability. It takes many forms and means different things to different businesses and markets. For us, using solar energy is a sound business investment, which in turn supports sustainability. It ‘s a no-brainer!” said Blair Gibbs.

Spy Valley Wines
Share this page
Back to top