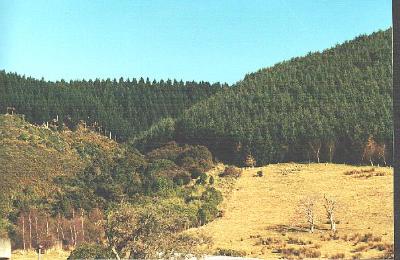 Biodiversity becomes challenged after centuries of grazing so our first challenge when we purchased the property in 1987 was land use. The lower frost free slopes were ideal for winegrowing, the steeper slopes trending native and exotic forestry. A walkway winds up through the gulley through remnant totaras and large Kahikiteas so a biodiversity plan was hatched. To ensure a localised biodiversity a nursery was engaged to propogate natives off the site to then be replanted back as seedlings. 25000 natives were planted along the lower slopes of the Waimate Walkway route and seed bombs fired by tennis racket up into the ald-man gorse areas. Twenty five years later the gorse is gone and full canopy closure is effected. Native birds such as Fantails, Tui and bellbirds have now returned in numbers creating a balanced mix of indigenous flora and fauna.

Point Bush Estates
Share this page
Back to top